I love to start projects. The problem for me, my husband and my home is that I don’t love to finish them as much as I love to start them. I love the creative part of making an idea come to life, however when it comes time to put on the finishing touches and clean up, I tend to lose interest. Am I crazy…does anyone like that part? This weekend, my husband and I promised we would finish one of the many unfinished projects we have in our house. The project we choose is a project that has been on the back burner for the last six months and we finally finished it last night. I decided to share our project on this blog so that I may inspire one of our readers to complete one of their own pesky unfinished projects.

In The Beginning
Our project began at the scrapyard. My husband is a natural born treasure hunter and loves to frequent the scrapyards to see what kinds of treasures he can find. Usually his treasures are metal pieces he can use when welding. About six months ago he found a very large fir glulam beam. Having seen the projects Millwork Outlet has done in the past with gluelam beams (floors, tables paneling, ect), he decided to buy the beam. When he brought it to the Millwork Outlet I originally thought it would make a neat coffee table. It wasn’t until we had a mobile milling machine come out to the Millwork Outlet three months later that we decided we would slice it into thinner more usable pieces. When it was finished being milled we had five 1 1/2″ thick glulam boards that were 24″ wide by 120″ long. As soon as I saw the finished boards I knew I wanted to turn one into a kitchen countertop. And it was just my luck that my countertop measured 24″ wide by 112″ long. 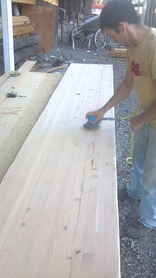 Step One: Sand
Two months later we decided that we should probably put the glulam to use rather than let it sit outside through the rainy Seattle winter weather. Now I imagine there are probably instructions for making wood countertops on the internet, but both of us prefer to forge our own road, so we decided to wing it and use our common sense instead – after all we work at the Millwork Outlet so this should be easy. We started by sanding the board because I was pretty sure we didn’t want slivers in our sandwiches when all was said and done. We sanded the top side as well as front edge with 85 grit sandpaper. We wanted to keep the board looking a bit rustic so we left some of the marks from the milling process. We finished the board with 120 grit sand paper which left the marks, but made the surface very smooth to the touch. We also double measured our countertop and realized that at 24″ we would be a bit narrow since the ugly formica countertop we had has a 2″ backsplash attached to the back. We found a piece of another board that had broken and sanded it down as well. Take home lesson: ALWAYS double measure.

Step Two: Finish and Protect
After we completed the sanding we were ready to apply a finish. Because it is a wood countertop and wood tends to rot when left wet, we knew the finishing step was extremely important. We had originally thought we would have to use an extra thick polyurethane coat, much like you see on bar tops in restaurants. However, a trip to the dreaded Home Depot made us think otherwise. Home Depot only carried one type of the extra thick polyurethane coating and was far from cost effective. We instead opted for a oil based polyurethane flooring coating because it is more resistant to scratches and it doesn’t require sanding in between coats (did I mention I hate redundancy and inefficiency?) The instructions called for two coats for flooring, but since we expected the countertop to get fairly wet around the sink we decided to go a bit overboard and we applied six coats total. We did the same to the back splash. 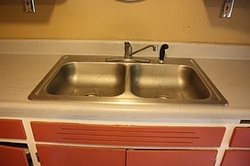 Step Three: Remove the Nasty Countertop
The most fun step of all was removing the old counter top. Because not even a Craigslister would want our old countertop, saving it was not a necessity, so when removing the countertop in one piece became difficult, my husband grabbed the saw and hammer and cut and beat it smaller pieces and threw it in the backyard. Next stop: the big green dumpster.

Step Four: Attach the Backsplash
Once the counter top was removed we measured, cut and attached the backspash to the wall. In our case the studs were way off the standard 16″ center to center so we screwed the backsplash in the bottom corner of each end so that the screws would be covered by the overlap of the countertop. We also added one to the top right hand corner for good measure which our microwave will end up covering. If you wanted you could router and plug the screw holes, but that was an unnecessary step for us. 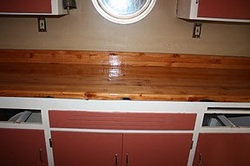 Step Five: Install the Countertop
For those of you who have ever tried to remodel an older house you know how frustrating it can be. I would be willing to bet that there is not a single ninety degree corner in my house. We expected that when it came time to install the countertop we would have to make some adjustments and the gaps along the wall wouldn’t be uniform. We were right. It took us a total of FIVE cuts and a timeout to move the stove before the countertop would slide into place. 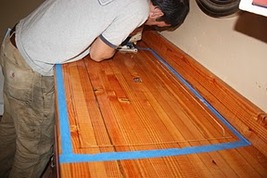 Step Six: Make Room for the Sink
Working at the Millwork Outlet has taught me that when cutting holes in your home for a construction project, smaller is better. When it came time to trace the sink for the cut out we aired on the side of caution because a hole too big would have completely ruined our glulam and we would have had to start all over again or buy a bigger sink. We traced the outside of our sink with blue masking tape and then measured one inch inside the tape line. My husband cut the hole with a jigsaw and then we crossed our fingers….dropped the sink in…and the sink dropped all the way to the floor…just kidding….it fit perfectly! 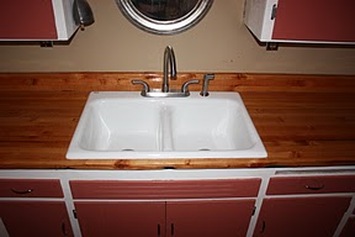 Final Step: Install the Faucet and Drains and Caulk
My husband has a saying he learned as a teenager installing custom cabinets and that’s “Do your best and then caulk the rest” and that’s just what we did! We caulked the gaps between the countertop and the backsplash with clear silicone sealant so water cannot get behind the countertop. We also caulked the sink edges so water doesn’t leak into our lower cabinets. And finally, we installed the faucet and drains and hooked them up to our existing system. The last step took the longest because we were completely burned out and wanted to quit. We almost didn’t hook the sink up because we were so tired, but we figured if we didn’t do it then it would probably stay that way until next week. Now the sink and countertop look beautiful, but the job is still not done because the old countertop is still sitting in pieces in our backyard and I cooked my breakfast this morning in my mircowave that is in my hall and as my Grandpa Val always says, “the jobs not finished until you are all done cleaning up“!
NOTE: We have three glulam boards left if anyone is interested in making a glulam countertop of their own. Feel free to give the Millwork Outlet a call (425)432-5189 and ask for Venise.
Tweet