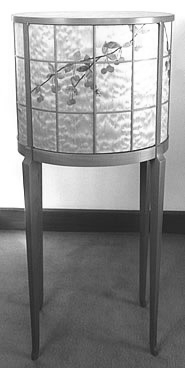 I was introduced to marquetry by Zivko Radenkov, a classmate of mine at CR in 1985. He created an amazing oval cabinet on legs, the cabinet barred as if panes in a window through which the viewer saw dogwood branches, leaves and blossoms. I had to give it a try, although my project was much simpler, and more geometric than Zhivko’s design. I created my wife’s Japanese family crest (called a mon) in the top of a couple of small tables I made for her folks.  It was successful, though far from perfect.

I have dabbled in marquetry in the years since — kept my hand in, but never done anything serious with it. There are many great marquetrarians working out there, and I’m fortunate to know a few of them — Craig Vandall Stevens, Mathew Werner and Silas Kopf. Recently I got marquetry fever, again, and have been making practice panels whenever time allows. I am no expert, but I know my way around the block, and when I was asked to  conduct a class on the subject for Rockler I decided to do that as well as offer a marquetry class in my own workshop.

The Rockler class, held in early August 2012, was a four-hour introduction attended by seven participants. Of course you can only get so far in four hours, but the double-bevel method is fairly simple and forgiving, and I think all the students came away with a good, basic understanding of the process. They all seemed excited to pick up the modest tool kit needed to continue exploring the work in their own shops, and I hope they do.

I’ll be offering a one-day (8 hour) introductory class in marquetry, for those interested, on September 8 coming up.