Those who know me know that I prefer old machinery, almost universally, to new. So it will come as no shock to learn that I have recently acquired a 14″ Davis & Wells band saw, the smaller (and I think somewhat younger) brother to my 1940-ish D&W 20″ saw. I like to leave the 20″ machine set up for resawing, while the 14″ model will serve for smaller jobs, circle and curve cutting, etc. I have to re-rubber and crown the wheels, and repair or replace the broken lower guide assembly — otherwise I think the saw is in operational shape. While it’s down for cleaning and refurbishment, I may strip the original paint, which is a little shabby, and give it a fresh look. We’ll see. I’m really looking forward to putting this saw in service. Here’s a few “before” images: 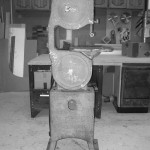 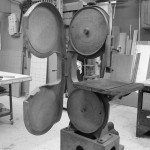 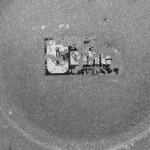 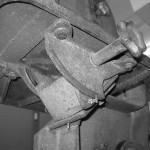 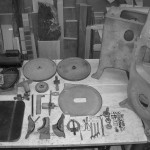 Note: The Comet Manufacturing company, of Los Angeles, made some Davis & Wells machinery in the 1950′s and ’60′s. This saw had remnants of the ‘Comet’ badge (decal) on the upper wheel cover, but the heavy cast base leads me to believe this saw was made by D&W proper, late ’40′s or early ’50′s, placed in Comet’s inventory and badged and sold as shown. Existing Comet product info from the late ’50′s shows the 14″ saw on a steel base.

So, you may rightly ask, why would I think this saw has any advantages over a more modern, or new 14″ saw produced by Delta, Powermatic, or any of the other usual players? Weight, quality of materials and casting, precision milling (where it counts) and overall design and craftsmanship. One look at the trunion assembly under the table, in the image above, says just about all that needs to be said. Compare that to any modern saw, and I rest my case. I would also mention cost as a factor. Typically, you can find older saws (and even an old ’50′s-’60′s Delta beats it’s modern descendant by a long shot, quality-wise, IMHO) for less than you pay for the poorer, newer stuff.

I guess I won’t wait by the phone to field endorsements from the current manufacturers.