A Look at the Seaton Tool Chest The first real tool chest that I built was based (loosely) on Benjamin Seaton’s famous tool chest that now resides at the Guildhall Museum in Rochester, England. Most woodworkers know it because of the famous book “The Tool Chest of Benjamin Seaton” – now in its second edition, and one of the core books for hand-tool enthusiasts. Despite all my efforts and trips to England, I’ve never gotten to see […]

The post A Look at the Seaton Tool Chest appeared first on Popular Woodworking Magazine. 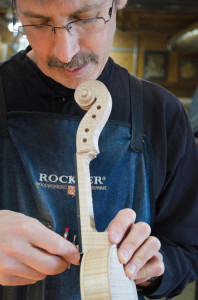 David Finck and I were bench mates at the College of the Redwoods for two academic years (’85-’86), studying with James Krenov. David has lived in North Carolina for many years now, building furniture and guitars, teaching, and more recently building violins. He is a consummate craftsman with a gentle but uncompromising approach to his work and attention to detail. He is perhaps most well known for authoring the book, “Making and Mastering Wood Planes”, now considered the authoritative work on making Krenov-style wooden planes.

David and his wife, Marie Hoepfl (also a 2-year alum of CR) have two daughters who are violin prodigies. After making a number of guitars over the years, David decided to have a go at making a couple of violins for his girls — keepsakes, if not exceptional instruments. Except, as it turned out, they were exceptional instruments, and David caught the violin making bug. He has made a number of violins by now, and these have enjoyed wide and high praise from people prominent in the violin world. In more than one prestigious blind comparison, David’s violins have been judged superior to iconic instruments made by recognized masters from the past 2-3 centuries.

From our days studying with Krenov, David has carried over and — if anything — intensified his devotion to precise, uncompromising craftsmanship in his furniture and his musical instruments. He has been an inspiration to me, and to many others. It doesn’t get any better. Visit the links below for more information … 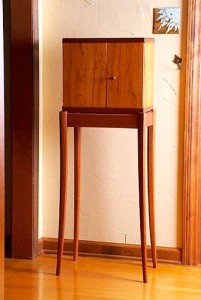 When you start studying ancient woodworking tools, it’s the similarities that are most striking – not the differences. Saws, chisels and planes – the core tools of the furniture maker – are only mildly different in the East and West. While some people amplify those differences – pushing a saw vs. pulling it is one example – these are largely artificial. All cultures both push and pull tools. And using […]

In Praise of the Engineer’s Hammer (aka a Lump Hammer) While I was at David Savage’s workshop I was delighted and surprised to see he used a “lump hammer” for assembling casework. David brought the hammer to my workbench when he helped me knock together my dovetailed tool chest carcase for a class. And when he saw me smile hugely at the lump hammer (instead of recoiling in horror, which is what I think he was expecting), he told me […]

The post In Praise of the Engineer’s Hammer (aka a Lump Hammer) appeared first on Popular Woodworking Magazine. Two weeks ago I managed to spend a few hours at the Celebration of Craftsmanship & Design in Cheltenham, an impressive display of bespoke furniture makers both young and seasoned. Contemporary English furniture always makes my head shift gears. Most of the stuff I see in America has roots in traditional design. But in England they are much more likely to go for broke with their designs. Some succeed; some […]

A Tour of David Savage’s Workshop and School For the last two weeks I’ve been teaching a course and taking a class in veneering at David Savage’s school and workshop, which sits on a farm in rural Devon. It is an inspiring place where amateurs and professionals hone their skills to the highest level – piston-fit drawers, London-pattern dovetails, drawing, design, veneering and French polishing. And unlike many places I’ve taught, the makers there make no distinction between […]

The post A Tour of David Savage’s Workshop and School appeared first on Popular Woodworking Magazine.